Long ago in the kingdom of Hyrule, an evil sorcerer began kidnapping young maidens. This sorcerer was known as Vaati, and it seemed that no one could stop him. Eventually an adventurer appeared who was able to defeat Vaati. This adventurer carried with him the four sword which caused him to be split into four beings, and by working together the four beings were able to seal Vaati deep within the earth. But now Vaati has escaped, and the task of defeating him again has fallen to Link!

This action adventure game is played from a top down point of view. There are a variety of often maze-like lands to explore (some above ground and others below) as well as a variety of enemies to defeat. Since Link is now in possession of the four sword, there are four Links on the screen. In order to complete the various stages, the four Links will often need to work together in order to solve puzzles and defeat the many enemies. The four links are able to form several different formations, such as a line or square. The formations help the Links perform actions that couldn't be done by one, like moving heavy objects or defeating numerous enemies. At the beginning of each stage, the four sword will be weak in power; to replenish the swords power, force gems must be collected (which can be found hidden in various locations or by defeating enemies). At the end of each stage is a dark magic barrier, and the only way to destroy it is by a four sword which has been completely restored. The game can be played by one to four players, however there will always be four links on the screen. In multi-player games each player will control one of the Links and will need to connect with a Game Boy Advance which is used both to control the game as well is provide each player with their own display when their Link is inside a house or in a cavern.

In addition to the adventure mode, a multi-player battle mode is included where four Links fight to see who wins. 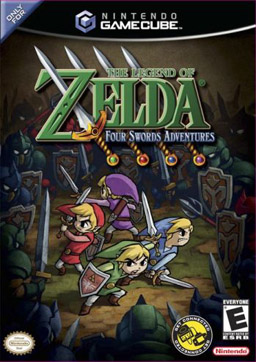