Gauntlet Legends is an arcade game released in 1998 by Atari Games. It is a fantasy themed hack and slash game, a sequel to 1985's popular Gauntlet and 1986's Gauntlet II and marks the final game in the series to be produced by Atari Games. Its unusual features for an arcade game included passwords and characters that could be saved, enabling players to play over the course of a long period.

Enemies, bosses, power-ups, music and sound effects are all getting radical makeovers. Atari is busily remapping carryover levels and cooking up devious new puzzles and hiding places for items, so don't even think of cribbing from the coin-op version. Graphical updates include real-time lighting, which is nowhere to be found in the arcade version.

The essential action -- team up with others, find keys, magic, runes and other items, and beat the stuffing out of anyone in your way -- remains unchanged from the arcade hit. Atari has delivered a far meatier storyline, though, spiffed up by cinema cut-scenes at the successful conclusion of a world. 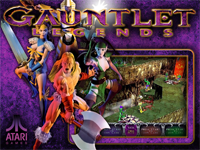