Tony Hawk's Pro Skater 3 is a skateboarding game in the Tony Hawk's Pro Skater series. It was developed by Neversoft and published by Activision in 2001 for the PlayStation 2, PlayStation, GameCube and Game Boy Color. In 2002, it was published for the Xbox, Game Boy Advance, Microsoft Windows, Nintendo 64 and Mac OS X. It was the first game released for the PlayStation 2 supporting online play, and the last game released on the Nintendo 64 in North America.

This game saw the introduction of the revert, a trick that enabled vert combos to be tied together with a manual, by tapping a button when landing in a quarterpipe. This allowed for much longer combos than in the previous two games, where landing in a quarterpipe would finish a combo. The game also added hidden combos. These were variations on standard tricks that could be performed as grab, flip, lip, or grind tricks. For example, double-tapping the kickflip button would, naturally, make the character perform a double kickflip. This system would later be refined in Tony Hawk's Pro Skater 4.

The game stood out in the franchise for being the first title to have online capabilities. Users could connect directly to other players online on the PlayStation 2 version—even prior to the launch of the network adapter, with a USB Ethernet adapter. Due to the shut down of most Sony servers the game is no longer playable with others online, except for via programs like XLink Kai or through websites that allow users to play online through a DNS. The PlayStation and Nintendo 64 versions run on the Tony Hawk's Pro Skater 2 engine, with a different revert animation that is the same as the PlayStation version of Tony Hawk's Pro Skater 4.

In both the Nintendo 64 and PlayStation versions, the wooden sides on the board (around the grip tape) had colors (except Bam Margera, Jamie Thomas, and the custom skater's decks), and the game had brand new tricks such as the Cannonball, Wrap Around, Fingerflip, Del Mar Indy and a brand new animation for the Airwalk. The Xbox version had an improved framerate over the PlayStation 2 and GameCube version, also including an exclusive level, the Oil Rig. 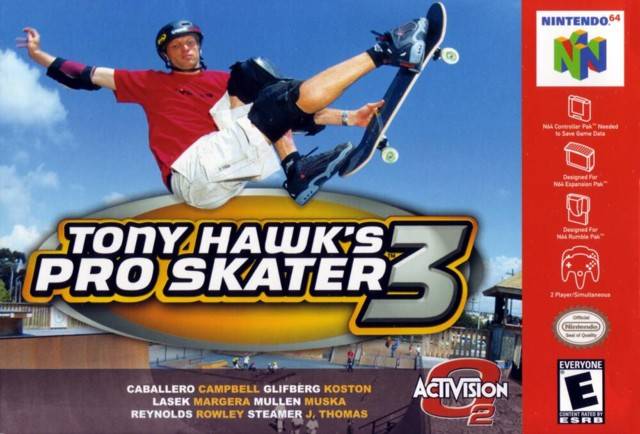