WWF WrestleMania 2000 is a professional wrestling game originally released in 1999 on the Nintendo 64. It was based on the World Wrestling Federation's annual pay-per-view, WrestleMania.

WrestleMania 2000 uses the game engine previously seen in WCW/nWo Revenge. More than 50 WWF wrestlers were included in the game, and, with the exception of existing superstars' move sets, all of them can be edited to the player's liking. Using the same system, the Create-a-Wrestler mode is extensive. The player is able to create a highly detailed wrestler with an extensive library of wrestling moves. Usual WWF modes such as Royal Rumble and King of the Ring modes are included, along with a pay-per-view mode, enabling the player to either recreate or create unique pay-per-views with TV-style features. Players can also create up to eight belts and put them up for contest.

The story mode places the player on the long road to WWF glory. Starting out as a rookie, the player gradually works his way up the ladder and earns opportunities to gain various WWF titles, win various tournaments, be challenged by various wrestlers and ultimately main-event at WrestleMania 2000. Although the story mode is long and extensive in the amount of matches it pits the player in, there are no branching story lines and if the player loses a match it is simply recorded as a loss in their win-loss record. In fact, wrestlers are expected to defend each title in pay-per-view events. For example, if one holds the European Championship, Intercontinental Championship, WWF Tag Team Championship, and the WWF Title, the player must defend all four in one pay-per-view event.

There are often feuds at different parts in the storyline, occasionally with one wrestler calling out another wrestler in the ring. Also, feuding wrestlers often interrupt matches, helping the opponent. However, the season continues whether or not the player wins or loses matches. If the player progresses through a winning season with a created wrestler and then starts a new season as a new created wrestler, the first character will still be used in season mode. 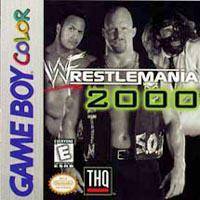 This game also exists on:
Nintendo 64