Trespasser uses the Jurassic Park license and takes place on "Site B", the Costa Rican Island from the Lost World where Jurassic Park's dinosaurs were originally created and, following the island's abandonment, allowed to breed out of control.

Players take the role of Anne, the sole survivor of an airplane crash who finds herself stranded in the Lost World, and who needs to find a way off the island (or at least avoid becoming a dinosaur meal). Throughout the journey, Anne will be accompanied by the disembodied voice of John Hammond, the founder of Jurassic Park.

Trespasser does not feature some of the typical first-person shooter interface elements. There are no health bars, ammo displays, or power-ups, and players can't pick things up just by walking over them. Instead, interaction with the environment is done using Anne's arm, which can be moved around using the mouse and which can be used to pick up items, throw rocks, push down crates or wield weapons. Anne's voice gives a rough estimate of the amount of ammo left whenever she wield a gun, and Anne has a heart-tattoo that fills with red as she becomes more damaged.

The game also features a 'realistic' physics model where every movable object can be knocked over, roll around, or thrown in a manner related to their size and weight. This also means players can crush some of the smaller dinosaurs with heavy crates, and can even use a rock to bash their heads in. The dinosaurs in the game are only trying to survive instead of existing solely for the purpose of killing Anne in wave after wave. Thus they run away when injured and will often attack other dinosaurs rather than the player. 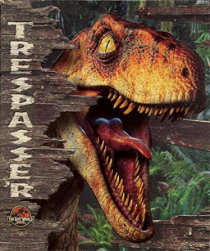