Following in the footsteps of The Legend of Zelda: Ocarina of Time 3D, Majora's Mask 3D is an enhanced remake of the Nintendo 64 game The Legend of Zelda: Majora's Mask. It keeps the same story as the original: while riding Epona through the Lost Woods in search of an invaluable lost friend, Link is ambushed by a Skull Kid and two fairies, who steal Epona and the Ocarina of Time. Upon catching up with them, Skull Kid turns Link into a Deku Scrub and flees, but one of the fairies, Tatl, is left behind and starts traveling with Link. Emerging in a new realm called Termina, Link is informed by the Happy Mask Salesman that Skull Kid has stolen a precious mask from him, the evil and powerful Majora's Mask. Link then learns that the moon is falling onto Termina's central city, Clock Town, and he only has three days to stop it.

Aside from graphical upgrades, some story and quest related features are reordered, removed, or expanded, and a few new features are added, such as two Fishing Holes, one near Southern Swamp and another at Zora Cape. Boss fights are also altered, with new weak points added in the form of a large eye resembling those on Majora's Mask. Using the old strategies won't work this time. Saving is also different. Playing the Song of Time to return to the Dawn of the First Day no longer automatically saves the game. Instead, the game must be saved at Owl Statues, which no longer force the player to suspend gameplay, or Quill Statues, which can save the game, but can't be warped to. 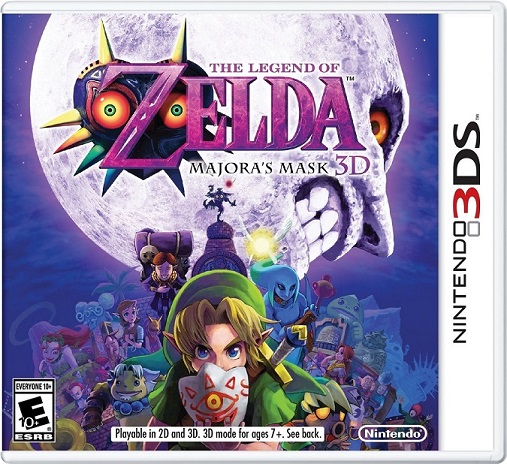