Your mission: to stay in the lead and defend your craft against all other pilots. This futuristic racing masterpiece is an update on the popular games WIPEOUT and WIPEOUT XL. You'll negotiate hairpin turns, take stomach-churning drops, and brave gargantuan jumps as you try to blast your opponents into dust with your arsenal of weapons. Featuring an impressive soundtrack by Fluke and the Propellerheads, WIPEOUT 64 brings fast gameplay, slick graphics, and fierce racing to a whole new level. Using an antigravity, hover-racing vehicle, you'll have to do more than move fast to keep your opponents down. There are all sorts of weapons and power-ups from missiles and mines to turbos that will come back to haunt you if you miss them. This installment of the classic racing game features all-new weapons (each ship has a minigun), and a new Challenge mode, which sets up time and placement conditions for you to overcome in order to stave off elimination. With so many impressive tracks, and such original play, WIPEOUT 64 has a place in any N64 library. Multiplayer modes support up to four players. 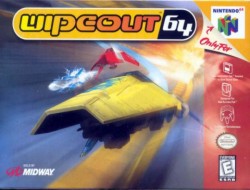