Metal Gear Solid: Peace Walker is a video game produced by Konami and Kojima Productions that was released for the PlayStation Portable in 2010. Peace Walker is the fourth Metal Gear title for the PSP, although it is only the second to be considered part of the series' main canon, following Metal Gear Solid: Portable Ops. It is also the first game in the series for a portable platform to be directed by series' creator Hideo Kojima. The series' regular tagline, "Tactical Espionage Action", was opted out for this entry in favor of "Tactical Espionage Operations" to fit the game's heavy cooperation gameplay. Due to the game's intended audience, Peace Walker is the first major title in the Metal Gear series to receive a "Teen" rating from the ESRB. Peace Walker was originally intended to be the fifth numbered entry in the series, but later had the "5" removed. The development team that worked on Peace Walker is as large as the team that worked on Metal Gear Solid 4: Guns of the Patriots.

Set in 1974 in Central America, the game follows the exploits of returning protagonist Naked Snake, now known as Big Boss, as he runs a mercenary unit using the resources he acquired from Gene at the end of Portable Ops, four years before. The game also adds more information behind the founding of the military state Outer Heaven. 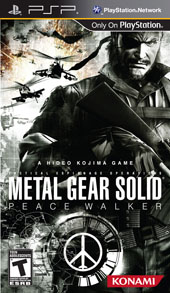