Pokémate is a mobile phone application that shares similarities with the Pokémon games, as players can catch Pokémon in it. The application allows players to send messages to other people on the user's friend list or chat with them. Players can select and capture Pokémon to keep in the storage feature of the application. The player can also subscribe to the game in order to receive more Pokémates, Poké Balls, and other media. It is currently only distributed in Japan; however, strangely enough, it was shown during the 2006 E3 summit, but remained Japan-exclusive afterward. 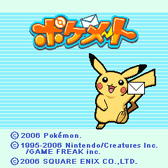