Mega Man Xtreme 2, known as Rockman X2: Soul Eraser in Japan, is a video game developed by Capcom for the Game Boy Color handheld game console. It is a spin-off title in the Mega Man X series and is a follow-up to Mega Man Xtreme, released the previous year. Mega Man Xtreme 2 takes place during the 22nd century, in an unknown year 21XX, between the events of Mega Man X3 and Mega Man X4. The DNA souls of robots known as "Reploids" all around the world are being stolen by a pair of villains in order to create an army of undead "Mavericks". The "Maverick Hunters" Mega Man X and Zero quickly spring into action, now with the help of their young ally Iris. 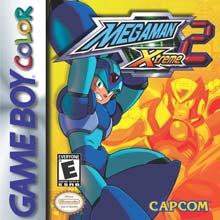