What is the story of Devil Survivor 2: Record Breaker? As one of thirteen demon tamers, you must stand against the mysterious and formidable invaders who seek to destroy Japan. By forging contracts with the demons that appear in the wake of a disaster, you will fight not only for your survival, but the survival of all humanity! One of these invaders will lay siege to the world each day. What will you do in only a day's time to turn back each of these beasts?

An enhanced version of the original Devil Survivor 2, and a brand new, full-length story taking place after the original's conclusion. With new abilities and demons, a brand new character, fully voiced English story dialogue, and over 100 hours of gameplay, the new content in Record Breaker greatly expands on the original DS game. Most importantly, Record Breaker will introduce a brand new chapter to the captivating story. Both newcomers and veterans alike will have a chance to learn more about the world of Devil Survivor 2, with the option of skipping to the new content right away or playing through the original game first. Either way, hard decisions will have to be made in order to survive.

• Difficulty Selection You can choose between two difficulty levels, and swap between them at any time. Regardless of which is chosen, the same story of friendship, struggle, and triumph will unfold. Blessed is an easier difficulty, intended for those unfamiliar with Strategy RPGs or the SMT series. It is designed to help the player see the story through to its stunning conclusion. Apocalypse is the traditional difficulty of the Devil Survivor series and best for RPG veterans and those players that want a little more challenge.

• Two full-length RPGs in one package! Devil Survivor 2: Break Record includes an overhauled version of the original Devil Survivor 2 as well as another complete adventure that takes place after its conclusion. Two incredible RPGs in one game! You can play the game from the very beginning or jump directly into the new story!

• Easier and more fun gameplay! Not only the whole new Triangulum story, but the original Septentrione story has been fully voiced! Also, we have paid careful attention to small details in controls to evolve the game to be easier to play.

• Mr. Shoji Meguro is in charge of the new music! New music added for the Triangulum story from acclaimed composer Shoji Meguro!

• Upgrade your demons through StreetPass! Enjoy the Nintendo 3DS's StreetPass Communications. This feature allows you to see other players' progress and give some bonus power-ups to your demons. 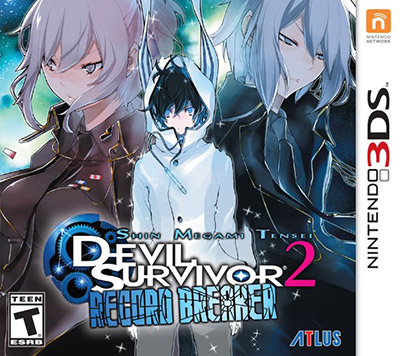