You've idolized him. You've seen his films. You've even copied his moves. Now you can be your martial arts hero, thanks to Dragon: The Bruce Lee Story. Loosely based on the movie of the same name, you'll learn to fight like the Master, as you take on swarm after swarm of opponents in this fast and furious fighting game. Enter the world of Dragon. A place where the martial arts legend Bruce Lee lived for 32 troublesome years. A place where you will encounter a multitude of the smartest and fiercest opponents ever to be seen in a Genesis beat-'em-up! At your disposal is a devastating array of over 35 different fighting moves. You WILL need them... Contains three different fighting styles: Mantis, Fighter, and Nunchaku. Many special secret moves to discover! As Bruce Lee, you can pull off a wide variety of moves roundhouse kicks, flying kicks, flying chops and throws that will leave your enemies reeling and your friends impressed. As you fight, you'll have to build up your Chi (sort of like a power meter) in order to gain special abilities and weapons. There are several different gameplay modes to challenge your skills: One-Player or Two-Player Story, and One-, Two-, or Three-Player (if you have a Multiplayer Adapter) Match modes. So bring Bruce Lee back to life and kick some butt in the process with Dragon: The Bruce Lee Story. 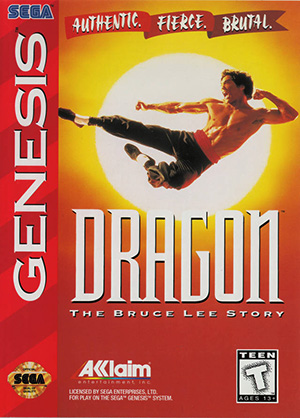