The spirit of martial arts Master Bruce Lee lives on in Dragon: a dangerously life-like combat simulation based on his biographical film. Apply discipline and a devastating array of age-old fighting techniques to subdue opponents more cunning than the real Bruce Lee ever faced. Unite your spiritual and physical strength to confront The Phantom, the mythical samurai which has plagued your thoughts and dreams, in a jeet kune do duel to the death! Dragon: The Bruce Lee Story is a action/fighting game in which you play Bruce Lee, the infamous martial arts master. As you go through the different levels, the game follows the format of the 1993 Universal movie of the same name, but is not identical to it. As Bruce Lee, you can perform a wide variety of high-flying martial arts moves, roundhouse kicks, flying kicks, flying chops and throws. Defeat a multitude of new opponents and build up your Chi in order to gain special abilities and weapons. 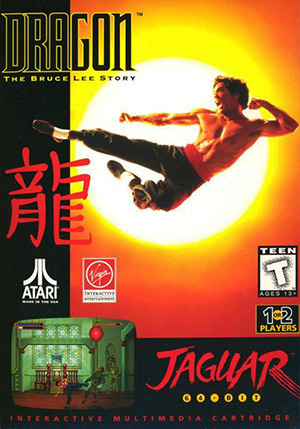