BioShock is a first-person shooter video game developed by Irrational Games and designed by Ken Levine. It was released for the Windows operating system and Xbox 360 video game console on August 21, 2007 in North America, and three days later in Europe and Australia. It became available on Steam on August 21, 2007. A PlayStation 3 version of the game, which was developed by 2K Marin, 2K Boston, 2K Australia and Digital Extremes, was released internationally on October 17, 2008 and in North America on October 21, 2008 with some additional features. The game was also released for the Mac OS X operating system on October 7, 2009. A version of the game for mobile platforms is currently being developed by IG Fun. A sequel, BioShock 2, was developed by 2K Marin and released on February 9, 2010.

Set in an alternate history 1960, the game places the player in the role of a plane crash survivor named Jack, who must explore the underwater city of Rapture, and survive attacks by the mutated beings and mechanical drones that populate it. The game incorporates elements found in role-playing and survival games, and is described by the developers and Levine as a "spiritual successor" to their previous titles in the System Shock series. The game received overwhelmingly positive reviews, which praised its "morality-based" storyline, immersive environment and it's unique setting, inspired by Objectivist philosophy and rhetoric. 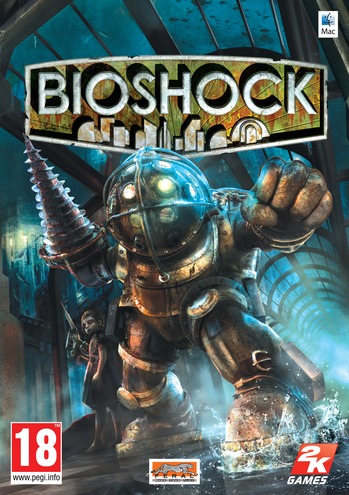