This is a mobile version of 2K's first person shooter. Many things remain the same as the original game but this one is played from a top down perspective.

The year is 1960 and the player character, Jack, is on board a plane crossing the Atlantic ocean. Things go wrong though and the plane crashes. Jack is lucky though and finds himself outside a lighthouse. This is no ordinary lighthouse however. It leads to Rapture, an Utopian underwater city built by the tycoon Andrew Ryan. It's not long until Jack is contacted by a man called Atlas who offers Jack his support.

Many features of the original game still exists in this mobile adaptation. Not only does it tell the same story, it also comes with many of its gameplay mechanics. Like in any other shooter the player can use numerous weapons, both melee and ranged. In BioShock the player also has access to plasmids which are special powers like electric bolts and fireballs. Rapture is full of splicers, insane people damaged by severe use of plasmids. These are the most common enemies in the game and comes in different shapes such as thuggish splicers that use melee weapons and leadhead splicers that are armed.

The player will also come across Big Daddies and Little Sisters. The sisters role in Rapture is to collect ADAM from corpses. ADAM is needed by the player to buy new plasmids. To get ADAM the player needs to gather it from a sister. This is not so easy since each sister is protected by a big daddy which has to be defeated in battle. Once the big daddy is defeated the player can choose to either kill the sister and get a large amount of ADAM or save her to get a smaller amount. For every three saved sisters the player will get a gift as compensation. 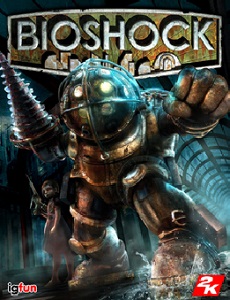