PSOne Classic version. Queen Brahne of Alexandria has begun using highly-advanced magical weapons to terrorize neighbouring kingdoms. Her daughter, Princess Garnet, runs away from the castle and befriends a group of good-hearted bandits lead by a skilled thief, Zidane, who intends to end the evil queen's desire to dominate the world. Soon after embarking on their quest, they discover the queen's threats merely cover a far more sinister plot. For the sake of mankind, Zidane and his friends must put an end to the Queen's reign before she and the evil forces that accompany her carry out the deadly plan.

● Play with eight unique characters that use a variety of weapons, magic and abilities. ● Step into a magical world with superbly detailed pre-rendered environments. ● Almost one hour of seamlessly integrated full motion videos. 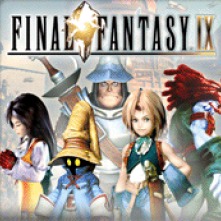