An exact port of the Famicom/NES classic game (thus, still missing the sand mill stage not included from the arcade version) for the Game Boy Advance handheld system in commemoration of the 20th Anniversary legacy of the original Nintendo Famicom system (and the release of the Famicom Edition Game Boy Advance SP system). As Jumpan (Mario before he had officially received his name), you have to jump and run your way up three different construction zones, save Pauline and take down the big ape. Donkey Kong tosses barrels at you to keep you from reaching the top -- and there are plenty of other obstacles such as elevators or fireballs with a mind of their own. 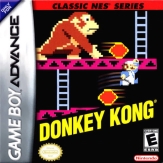