Magical Drop III will take you into the magical world beyond time and space, where for centuries, the "Magical Drop" tournament has been staged every year. Naturally you can also compete against your friends in one of the many multi-player games. A special plus of this edition is the extended full version of "Magical Drop Plus 1!" featuring for example an archive with dozens of original designs and more than 200 tricky mind twisters.

This is the second PlayStation port and features the rebalanced gameplay mode from Yokubari Tokudaigou! alongside a port of Magical Drop Plus 1!, which is based on the Japanese version instead of Chain Reaction. The game features a slightly slower gameplay pace than the Japanese version, while the game's script is translated into multiple languages. Unlike previous versions released outside of Japan, this game retains the Japanese voice work. 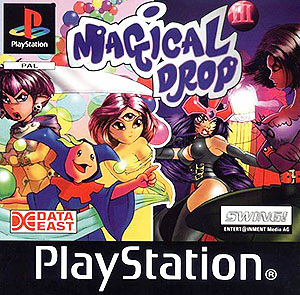