From an old magic book, Inside the Magical Drop is a wonderful magical land. The mysterious Magical Drop will give you anything you wish. This year, many competitors are going to a great Magical Drop Meet to win the Drop. Who will win? Let's start the fight!

Magical Drop III is the third installment of the Magical Drop series. The basic rules of the game haven’t changed but with adjustments and additions to the system from Magical Drop II, this version is much more lively and chain-based than its predecessor. Along with the addition of the Magical Journey mode and new characters, there are now more ways to enjoy the action. Control a clown to pull in and throw back balloons hurled from the top of the screen. If you line up three or more balloons of the same color in a row vertically they will burst, but if you’re not quick enough the balloons will squash the clown and it’s game over. Once you’ve caught the hang of bursting balloons, next you need to master combos and chains.

The game adds a new mode, Magical Journey (Adventure), replacing Flash Mode (was only available in Japanese releases) from Magical Drop II. The player chooses a character and participates in a board game. Magical Drop III also has a Challenge Mode (VS CPU), VS Mode for 2 players and Puzzle Mode.

Magical Drop III introduces a number of new characters. There are now representatives for all 22 Major Arcana and one extra character.

The North American Neo Geo version of the game replaces all of the voice acting with the announcer from Chain Reaction (first Magical Drop game but released as Chain Reaction in NA). Character endings, fortune-telling, and the Difficult battle mode have been removed. The PAL version features the altered set of gameplay modes from the NA version, but features a small number of voice actors representing separate languages. 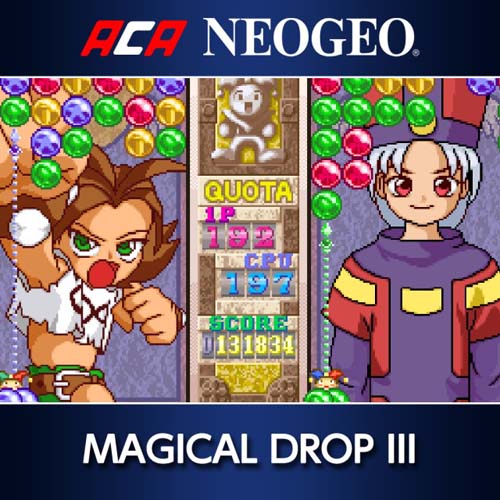