A young man named Crono is about to enjoy a carefree day: he plans to go to the Millennial Fair, where his friend Lucca intends to demonstrate her newest scientific invention: a teleporter. Upon his arrival Crono meets a young girl named Marle, who volunteers to be the first to test Lucca's new device. However, Marle's pendant affects the teleporter's mechanism in a mysterious way, and as a result she is teleported four hundred years into the past. Crono and Lucca quickly recreate the time portal and follow Marle. They find out that her unexpected appearance has created some confusion, and proceed to fix the error, which in turn leads to unforeseen consequences, eventually compelling the heroes to travel to different time periods and change the history of the world.

Chrono Trigger is a Japanese-style role-playing game in which the player takes control of a party consisting of up to seven characters, developing the combat skills of its members and managing their equipment. There are no random encounters in the game: all the enemies are either visibly walking on the field maps and can be avoided by the player, or are waiting to ambush the party. No enemy encounters occur when the player navigates characters over the world map.

The game utilizes the ATB (active time battle) combat system from Final Fantasy games as one of the combat style selections offered to the player in the beginning. The other selectable battle mechanic pauses combat whenever the player accesses the menu, effectively removing the real-time element and rendering the battles fully turn-based.

As the characters grow in power, their parameters increase, and they learn new "techs" - special powerful attacks and maneuvers which cost them magic points to use in battle. Techs may target a specific formation of enemies (e.g. a line) and can be used tactically depending on the enemies' positioning in combat. Characters may execute techs individually or perform double or triple techs, where each character contributes a tech which is combined with one or two others to unleash a powerful attack.

Once player-controlled characters acquire the ability to travel freely between time periods, the game's plot develops in a non-linear fashion. From that point on the player may opt to face the game's final adversary in combat and complete the story, or perform other plot-related quests. Depending on the moment of the story when the player decides to proceed to the final battle, the game may be concluded with thirteen different endings. The New Game+ option allows the player to start the game anew after having previously completed it, carrying over levels, techs, and equipment of the characters.

The PlayStation version features an anime-style introduction movie and cutscenes, a "movie theater" mode which allows the player to re-watch these movies and listen to the game's songs, as well as an unlockable bestiary, dungeon maps, and art gallery. 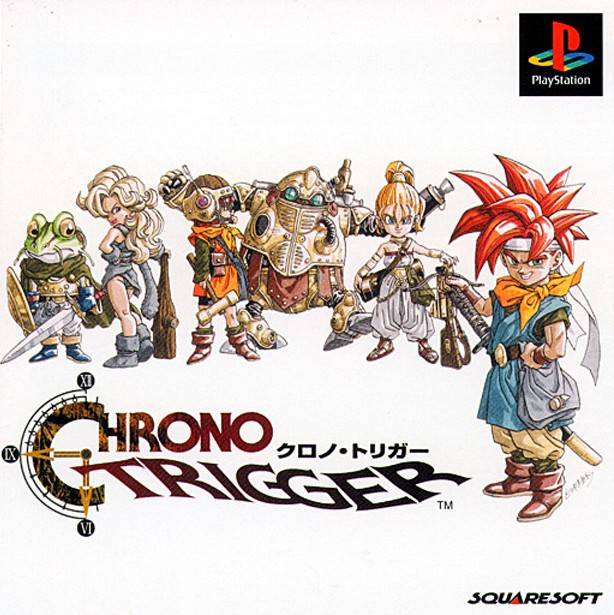