Wonder Momo is an action game starring a girl named Momo. The game is actually a tokusatsu "hero show", I.E. a stage show with people in costume acting as heroes and villains; such tokusatsu shows were once a popular form of entertainment for children in Japan and generally would feature well-known heroes and villains, such as characters from Kamen Rider. However, based on the appearance of the audience, the "Wonder Momo" show seems to be aimed at a slightly different audience. It is being presented at "Namco Theater". 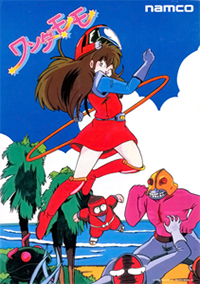