Call of Duty: Black Ops is the seventh edition of the Call of Duty FPS franchise, which is set during the Cold War theater, and casts the player in the role of various special forces soldiers conducting covert top secret operations colloquially known as 'black ops' that which governments maintain deniable knowledge of. As with previous Call of Duty games, the player will switch between different characters engaged in operations around the globe that include Vietnam, Russia, Cuba and Laos. The two primary characters are soldiers Alex Mason and CIA agent Jason Hudson, members of the black ops group known as the Studies and Observations Group (SOG), who have been tasked with investigating and dealing with the Nova-6, an experimental Soviet chemical weapon.

As with its predecessors, Black Ops comes with online and offline multiplayer support that features the usual game modes including Free-for-All, Team Deathmatch and Capture the Flag, during which players will once again earn XP points and gain new ranks. Returning from Treyarch's previous Call of Duty outing, World at War is a zombie co-op mode that allows two players to play together offline and four players online. Players will be able to earn CoD Points, which are awarded as the player earns XP, with CoD Points being awarded at a rate of 1 for every 10XP earned. These can then be put on bets on special 'wager matches', which if won gives the player additional CoD Points and XP.

A new feature in Black Ops is the Create a Class 2.0, which allows players to more extensively customize their multiplayer character, including dog tags, camo patterns, emblem and gun sight reticules. Also included for the first time to a CoD game is the ability to pilot aircraft which comes in the form of the Hind helicopter gunship and the SR-71 Blackbird stealth plane. 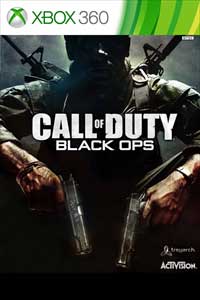