You are Mappy, the "Micro Police", a police-mouse whose job is to collect valuables from a house of burglar-cats. In hot pursuit of our hero is a gang of five pink cats called Meowsky or "Naughty Folks" and a large red fat cat called Goro or "Boss The Big Bit".

You get from floor to floor by jumping on trampolines and various doors are your only defense against the cats. Points are earned by recovering stolen goods. Other ways of earning points are bouncing on a trampoline, putting cats in the microwave, striking a cat with a door, striking cats with a bell, retrieving a treasure from the Boss cat Goro or dropping cats through a hole in the floor. 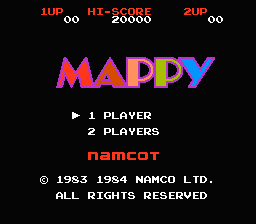