Quake is a first-person shooter video game that was released by id Software. It was the first game in the popular Quake series of video games. It was released on June 22, 1996.

The player takes the role of an unnamed protagonist sent into a portal in order to stop an enemy code-named "Quake". Previously, the government had been experimenting with teleportation technology, and upon development of a working prototype called a "Slipgate", this enemy has compromised the human connection with their own teleportation system, using it to insert death squads into the "human" dimension, supposedly in order to test the martial capabilities of humanity.

The sole surviving protagonist in Operation Counterstrike is the player, who must advance, starting each of the four episodes from a human held but overrun military base, before fighting through into other dimensions, traversing these via slipgate or their otherworld equivalent. Once passing through each slipgate, the player's main objective is to survive and locate the exit which will take him to the next level, not unlike that of id Software's previous hit, Doom.

The game consists of around 28 separate "levels" or "maps", grouped into four episodes. Each episode represents individual dimensions that the player can access through magical portals (as opposed to the technological Slipgate) that are discovered over the course of the game. At the start of each episode, the player is deployed in a futuristic military base and he has to find a slipgate that will take him to the alternate realm. The various realms consist of a number of gothic, medieval, as well as "fire and brimstone"-style caves and dungeons with a recurring theme of hellish and satanic imagery reminiscent of Doom (such as pentagrams and images of demons on the walls). The latter is inspired by several dark fantasy influences, notably that of H. P. Lovecraft; most notably, Dimensional Shamblers appear as enemies, the "Spawn" enemies are called "Formless Spawn of Tsathoggua" in the manual, the end boss of the first episode is named Chthon, and the final boss is named Shub-Niggurath (though actually resembling a Dark Young). Some levels have Lovecraftian names, such as the Vaults of Zin and the Ebon Fortress. Originally, the game was supposed to include more Lovecraftian bosses, but this concept was scrapped due to time constraints. 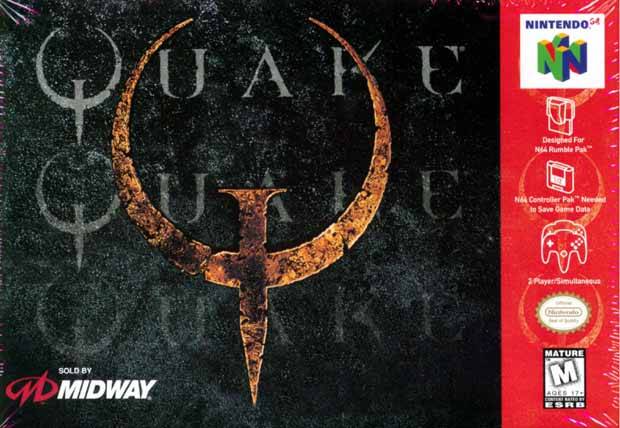