Gobble, gobble, gulp! Who's munching Power Pellets? Who's zipping around the maze at top speed, chomping up ghosts and scoring big points? It's Pac-Man, the world's hungriest character! Devour a fruit treat and get a big bonus score. But if you're caught by the little haunters, you're ghostflakes! Use the warp tunnel for a quick escape. Now play this classic game alonew or with a friend. Connect your Game Boys for double Pac-Man mania. Scramble around your own maze and chomp a ghost. It pops up in your opponent's maze, and he's got to skedaddle even faster!

● Scarf up the Fruit Treats for even more points! ● See the whole maze at once or zoom in on your part of the path. ● Even up the competition by choosing a different round than your opponent. 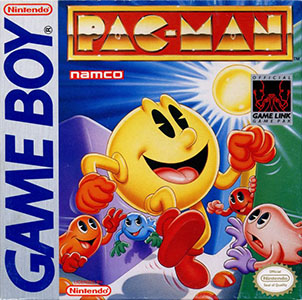