Pac-Man's Got a Snack Attack!

Look out! He's back! It's PAC-MAN, the world's hungriest ghost-chaser, zipping around the maze after delicious ghosts. Watch him scoot, chomping down dots and Power Pellets. Then he turns on his haunters and -yum!-ghost dessert. But if he's not quick enough, they'll gobble him up instead. Better duck into a warp tunnel for a quick escape. Now get twice the frenzy, twice the fun. Connect two Game Gears to challenge a friend. When you scarf up a ghost, it pops into your opponent's maze. Then he's got double ghost-trouble, and you've got the points!

● Gulp down Fruit Treats for big bonus points. ● See the whole maze and ghost net, or zoom in on one part of the path. ● Scare a friend! Choose a different round than your opponent's to even up the competition. 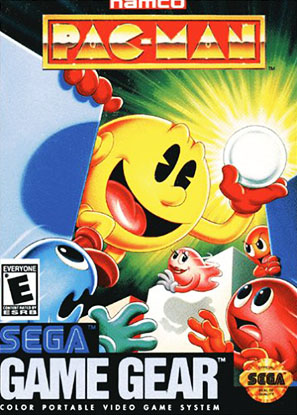