Imagine Ben Hur in a galaxy far, far away. Replace the two-wheeled carriage with a futuristic, hovering pod -- now take away the horses and strap two giant afterburner-powered engines to the vehicle. The boost of the two fuselages pulls the carriage forward at speeds in excess of 600mph and a stream of pure energy, called a mag beam or coupler, makes sure that the engines don't fly off in opposite directions. Like its "real," up to 40-foot-long counterparts in the movie, Racer's pods use a three-point dynamics system that will cause the carriage to realistically drift in the air behind its two engines. Unlike the movie, which features 18 opposing racers, Episode I Racer stars more than 21 characters complete with their rides, including three pods based on original design concepts that weren't used in the final film. 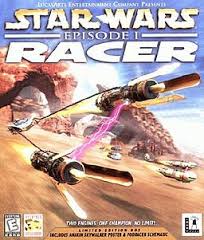