The game design of the Game Boy Color edition of Star Wars Episode I: Racer is loosely based on the Nintendo 64 version. The game still takes place over multiple planets in the Star Wars universe -- the deserts of Tatooine, the ice tracks of Ando Prime, and swamps of Baroonda. You take control of Anakin and try and defeat your "rival" on each of the game's tracks. When you come in first on any track, you can take control of that track's "rival" alien and his pod racer -- and each alien's Pod Racer controls and drives differently. The controls are of the simple Accelerate, Brake, Left Turn, Right Turn nature -- but like the N64 version of the game, you can activate an Engine Boost when your speed reaches a certain peak. But it's only for temporary use, and will cause damage to your engines if you leave it on for longer than a few seconds. 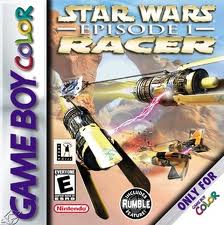