Minecraft is a game about placing blocks and going on adventures. Explore randomly‐generated worlds and build amazing things from the simplest of homes to the grandest of castles. Play in Creative Mode with unlimited resources or mine deep into the world in survival mode, crafting weapons and armor to fend off the dangerous mobs.

Craft, create, and explore alone, or with up to four players in split‐screen and up to eight online. Compete with your friends in Battle, a mini game for Minecraft console editions where you get to challenge up to 8 players online or 4 players in split-screen in a fight for survival, where speed, strategy- and sometimes just pure luck- will make you the winner.

To celebrate Minecraft on Wii U, this game now comes with the Super Mario Mash‐up Pack. Mario and Minecraft, together at last! The pack includes: ● 40 new Super Mario‐themed skins including Mario, Luigi and Princess Peach, as well as troublemakers like Bowser, Wario and all seven Koopalings ● Super Mario World itself! Professional Minecraft builders have remade the likeness of the Mushroom Kingdom and beyond, with Mario‐themed versions of the Overworld, The Nether and The End for you to explore. ● So many Mario‐inspired surprises to discover, from islands shaped like Warp Pipes to towering sculptures of Nintendo's iconic characters. We've recreated villainous hideouts, too: like Bowser's Castle, Bowser’s ship, and Boo’s House. ● Super Mario‐style textures, numerous Mario‐themed puzzles, dozens of character skins and music from Super Mario 64 to enjoy 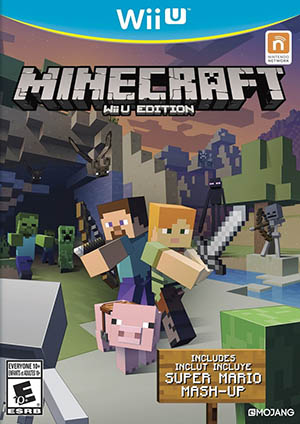